Understanding How to Use Apostrophe As a Punctuation Mark 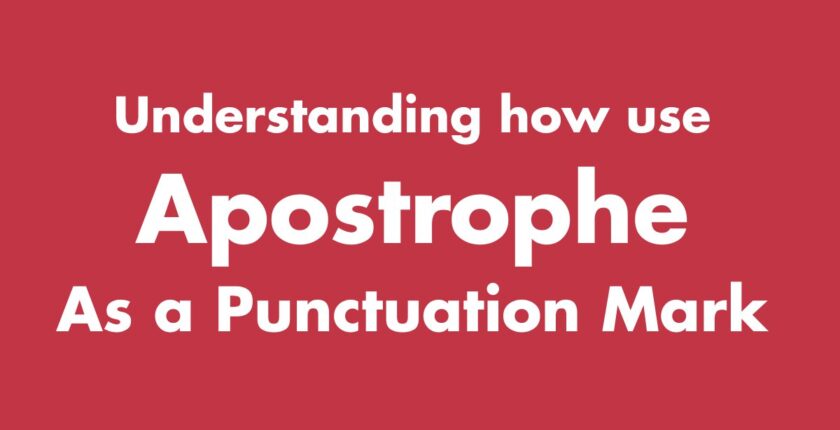 This is because you’ll be tested on writing and minute details like punctuation will not be as minute as you think to your examiner. Therefore, to further prepare your for this exam, here is an article that will help you understand how to use apostrophe.

So, sit back, relax and read.

And try to make mental examples yourself so you never forget how to use this punctuation mark.

How to Use Apostrophe As a Punctuation Mark

As a punctuation mark, apostrophe is mainly used to show possessions, plurals and contractions.

How to Use Apostrophe to Show Contractions

As a rule of thumb, you should note that ‘its‘ and ‘it’s‘ are two different things and should not be confused as the same. This is because ‘its’ is the possessive form of the pronoun ‘it’ while ‘it’s’ is the contracted form of ‘it is’.

Furthermore, you should also be careful not to use contractions in formal writings. They are informal and should only be used when writing in informal contexts.

How to Use Apostrophe to Show Plurals

You use this punctuation mark to show plural when certain abbreviations, letters, or words are used as nouns.

How to Use Apostrophe to Show Possessions

Different authorities have their rules for using this punctuation mark to show possessions. Regardless, we will look at it on a general note.

To form the possessive of a singular noun, you add an apostrophe followed by ‘s’ whether the noun ends with ‘s’ or not.

However, there are exceptions to this rule. That is, you use only an apostrophe for singular nouns that are either in plural form or have a last word in the plural form which ends with ‘s’.

Furthermore, nouns that end in ‘s’ or with an ‘s’ sound only take an apostrophe when they are followed by sake.

Also, a proper noun, let’s say the name of a restaurant, that is already in possessive, should be left as it is.

To indicate individual possession, you use an apostrophe for each person.

That is, the speaker is referring to their individual houses.

To show shared possessives, you use a single apostrophe and ‘s’ as the case may be.

This is because both Mary and James own the house.

Wrong: The house over there is Mr. Andikans,’ but the one here is for his brother.

Right:  The house over there is Mr. Andikan’s, but the one here if for his brother.

Now that you know how to use apostrophe, why don’t you get started writing already? If you aren’t sure of the right step to take, join a preparatory class that will guide you as you prepare for IELTS.