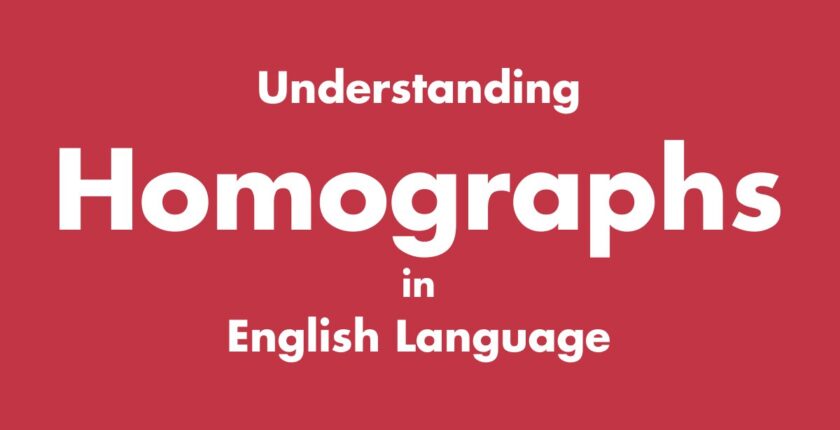 Just like modal auxiliary verbs ‘will’ and ‘would’, understanding homographs in English language requires rapt attention lest you should make a mistake.

What are Homographs in English Language?

These are basically words that are spelled alike though with different meanings. Sometimes, they may have the same pronunciation, other times they don’t.

If you want to ace your IELTS test with a high band score, you have to gain a thorough understanding of these words and know how to use them correctly. If you are having trouble understanding homographs in English language, this article will simplify it for you.

How to Use Homographs in English Language

To improve your proficiency in English language and help you prepare for IELTS with ease, we’ve curated a list of ten confusing homographs. Do study them and take note.

This word means to endure; to present; to have or display; to carry in the womb, etc. Example, “The girl bears much semblance to her father.”

On the other hand, the word also refers to the large omnivorous mammal. Example, “I saw a bear in the forest.”

This word can be used to refer to the liquid that drops from one’s eyes. Example, “A tear dropped from her eyes as he broke the news to her.”

Also, this same word describes the action of rending or pulling something apart. Example, “He said he would tear the documents to shreds.”

This word can be used to describe the action of removing a gap. Example, “Move away so she can close the door.”

Furthermore, it refers to intimacy. Example, “Bella is a very close friend of mine.”

This word is mostly used as the singular form of the verb ‘do’. For example, “She does it every day.”

It is also the plural form of a female deer. For example, “ I saw some does grazing in the field.”

This word is used to describe a false statement. Example, “She told him a lie to save her face.”

It is also used to refer to the action of resting in a horizontal position on a surface. Example, “The book lies on the table.”

The word ‘fair’ can be used to describe somebody’s appearance. As in, “That lady is fair in complexion.”

Moreover, it is also used in reference to being just and impartial. Example, “The accused will have a fair trial.”

This word can mean to fail to hit. As in, “I missed my target.”

It can also mean a title of respect for an unmarried lady. Example, “You may sit here, Miss Willie.”

This word can be used to refer to the modal auxiliary verbs used to show permission or possibility. As in, “You may sit here.”

Furthermore, it is also used to refer to the fifth month of the Gregorian calendar, following April and preceding June. Example, “Our wedding will take place on May 6th, 2021.”

When you hear this word used, it can describe the movement of air. For example,  “The wind blew through her hair as she stood on the deck of the ship .”

It also means to entwist or enfold. As in, “If you don’t wind your hair, it will get tousled”

This word describes a thing that has a physical existence. For example, “Tina carried her pencil and other objects she uses to sketch.”

Furthermore, it means to disagree. As in, “I object to the proposal to build a new location.”

We hope you now understand how to use homographs in English language. In addition, you should note that the words cited in this post have several meanings but we only gave few of them while explaining the topic.

Not withstanding, as you attend our preparatory classes, you’ll be given more insight on these, as well as other difficult words in English language.