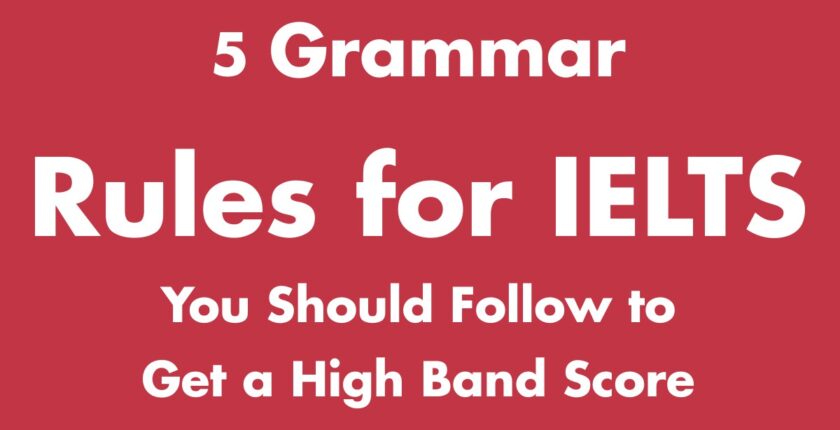 Success in every doing comes with its rules. The same applies to IELTS. If you desire to get a high band score, you have to obey the grammar rules for IELTS especially for the speaking and writing modules of the test.

To pass your IELTS test with a good band score, your grammar has to be top-notch. This doesn’t mean you should write or speak with verbose vocabulary. It means all what you write or say should be grammatically correct according to the standard of English language.

This includes your ability to use simple and complex sentences correctly without mixing tenses or flouting the rule of concord.

In addition, you should note that 25% of your mark in the writing and speaking modules of IELTS will be from making blunder-free English expressions. And as such, you need adequate knowledge of these grammar rules for IELTS to guide what you write or speak.

Some nouns in English language are uncountable in nature. And as such, you aren’t expected to pluralise them. Some of these nouns include:

You should also avoid attaching the article ‘a/an’ to these nouns. Don’t add a number to them too. Just use them in their natural form or make use of partitives. For example, you should say or write:

The prepositions that should follow certain nouns and adjectives can be quite confusing. However, let this guide you:

You use the -ing form after verbs such as consider, finish, suggest, deny, recommend, mind, practise, keep, involve, give up, enjoy, consider, avoid, etc.

On the other hand, you use to + infinitive verbs after verbs such as deserve, promise, afford, ask, help, refuse, offer, would like, want, seem, etc.

Many test takers use ‘the’ wrongly in sentences. You shouldn’t be one of them. So, make sure you adhere to these grammar rules for IELTS guiding the use of the article ‘the’.

Therefore, this is how to use ‘the’:

However, you should avoid using ‘the’ in the following ways:

Anytime you write or speak, make sure the verbs you use agree with the nouns. That is, if you are using a singular noun, then the verb has to be singular. For instance:

• The man with his wife is coming here tomorrow.

• The man and his wife are coming here tomorrow.

• There are many girls in that house.

• There is a girl in the kitchen.

Now that you know the grammar rules for IELTS, you should ensure you always stick to them. Failure to do this will amount to a terrible band score which you most definitely wouldn’t want to have.

Moreso, if you need guidance as you prepare for your IELTS, join us at Bivent Education. We’ll equip you with the right knowledge and tutorial you need to pass your IELTS test.